“Might as well count our advantages and quit whining about our sorry luck.”      –Mike Blakely (The Snowy Range Gang)

“Do all things without complaining and disputing.”      –Philippians 2:14 (NKJV)

It had been a good trip. There were five other guards so I didn’t have to ride with the gold and was able to sit with Molly in a coach next to the express car. We had learned on previous runs that it is often better to leave one person out of the express car to sort of roam in case of trouble. We left Pueblo not too long ago and were on the last leg of the journey into Denver.
“Where are you going Miles?” she asked as I stood up.
“To find the conductor. I want to see how far we are from the water tank.” I reached for the Greener.
“Do you always have to take that old shotgun with you everywhere?”
“Habit.”
“Don’t you go getting into trouble, and don’t stay too long.”
“Trouble,” I replied. “How can I get into trouble ridin’ in a train?” I turned and walked down the aisle.
Entering the next car I saw the conductor tussling with a man who appeared to be drunk.
“You have to settle down. I can’t have you disrupting the other passengers this way,” said the conductor trying to get the man down in a seat.
“Disputin’? I’ll disrupt you,” and he pulled a knife. “I’m gonna gut yuh like an ol’ hog!”
I walked down the aisle. “Put the knife away!” I ordered.
“What?” and as he turned I swung the Greener and caught him on the jaw. He went down with a thud.
“Thanks Forrest,” said the conductor. “I’ll put him off at the stop. We should be there now.” And as he said that I felt the train slowing down.
It didn’t make sense, or my guts were telling me something. Why make a ruckus now? The train had stopped and I hurried back to my coach. As I entered I saw two rough-looking characters at the far end. They had shouted something to the passengers. One had a gun next to Molly. I started forward.
“Mister,” came the voice. “You’d better stop or this pretty lady is goin’ to be dead.” Glancing at the man to his left, I saw he had a gun out as well.
I hesitated a moment and started walking deliberately toward them. “Mister, I’m warnin’ yuh!”
Guess this was the time of reckoning. I pulled my pistol and his eyes widened in surprise. That was all the time I needed and I shot. The bullet hit him in the head and threw him back. Turning to the other man, he fired, and I felt a nip on my left shoulder. Before he could fire again I shot and the bullet took him in the face. At the time I didn’t realize it but a third man clambered out the opening. I reached down for one of the guns and gave it to Molly. “Be right back!”
He was running for his horse, but then I noticed about half dozen at the express car. One, on horseback, looked my way. He fired and started riding toward me.
“Forrest!” he yelled. It was Makem.
I saw that they were placing a charge of dynamite at the door of the car. I fired once at Makem and rushed back inside. I banged on the express car door. “Dynamite! Dynamite!” I didn’t figure they would answer me but hope they would hear so they could take cover. Then I hollered to the people in the car to get down. I started back outside and a shot was fired by Makem. I must have hit his horse for he was pinned down under it.
With him firing I couldn’t get a shot at the others. I went out the other way and started slowly down the side of the car. Really didn’t have a plan and what if the dynamite went off when I was halfway down?
“This is it Forrest!” Makem had come on through the opening. I was in the process of reloading. He laughed and somewhere I heard another laughter. I dropped my pistol, raised the Greener and let go with both barrels. The blast knocked him back and off his feet. Picking up my pistol, I finished loading it and then reloaded the shotgun. As I rushed back past Makem, “Yep, that was it.”
Cautiously I went back through the car to the other side. They were still working but hearing the shots made them nervous. I started toward them and fired from the Greener. It was close enough that some of that shot would hit them. I fired the pistol and hit one. They now forgot the dynamite and began to take care of their own selves. Someone, possibly a brakeman fired from the area of the caboose and a man went down. I was closer now and discharged the other barrel. That caught a couple of them that were on the ground. They struggled for their horses. Let me tell you for a few seconds it was commotion.
They were riding off and  I stood there for a bit. Then, the thought hit me, “The dynamite!” I looked and it was there, stuck in the door, but thankfully, they hadn’t lit it yet. I paused and gave the good Lord a “Thank you.”
The conductor was walking toward me. “Load the dead ones up and we can get out of here. Oh, there’s another on the other side of the train.” Then I went back to Molly. She was standing there, waiting.
“Miles, you’ve been shot.”
“Nothing much, a few scratches. Let’s go back in and settle down. Denver next stop.”
We got back to our seat. I made sure my pistol and shotgun were loaded. Turning to Molly I said, “See what kind of trouble can a person find on a train?” 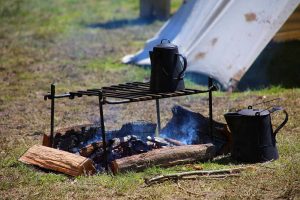 Over a small fire I made coffee, fried bacon, and ate the last of the sourdough bread I’d been saving. Once more I checked the trail–nothing there.”
–Louis L’Amour

Hope I didn’t keep you waitin’ pard. Burnt some daylight this mornin’, decided to stay under the covers a mite longer. Now there’s a crink in my neck; not sayin’ that bein’ in bed caused it ’cause I didn’t get up earlier to see if it was there.
Ahhh, really good coffee this mornin’–hot, black and strong, just the way I like it. Speakin’ of strong, I read something last week that will make you laugh your suspenders off. I didn’t get the name of the college, but students there, now get this, are demanding, yep students demanding that the lowest grade is a C and there can be no essays on exams. Tell you what I think, besides that they are spoiled brats; I think it is from years of everyone wins a ribbon, everyone gets a trophy. There is a definite Biblical principle here–there is no crown without a cross. Bear your cross, pick it up here on earth and there will be a crown (maybe a new Stetson) waiting over Yonder.
Finished that cup fast, time to refill. Speaking of refilling, summer is here and time to get a new notion on things. Relax a bit, take a vacation with my sweetie, gather up some of my ponderin’s and get ready for the next school year. Got a new chair for my birthday so I can sit outside, just might try it out today and this weekend. Ahhhh, beautiful mornin’ and good coffee. Want to thank you for stoppin’ by for a little Perc on Saturday.
Vaya con Dios, pard — and don’t forget to check your cinch.

“We should have talked about dignity and freedom; those things count for more than money. Money’s soon spent, and when it’s gone it leaves no mark. But when a man loses dignity, that leaves a mark on him that stays.”      –Elmer Kelton (The Day the Cowboys Quit)