We mutually pledge to each other, our Lives, our Fortunes, and our sacred Honor.”
–last phrase of the Declaration of Independence

That was an unique group of men; those men that signed that document that led to our independence from Britain.  Now that document did not make us free.  There were eight years of warfare.  Civilians, men who were not used to being soldiers, were put to the task of securing the freedom of what was to become the United States.  Two severe winters, one at Morristown, the other at Valley Forge, were survived and out of those times came an army.
This phrase epitomized the thought of those men who signed the Declaration.  Most folk today probably understand the concept, at least to a degree of giving one’s life and fortune for the cause of America.  However, we do have some jerks who take a knee during the National Anthem and it isn’t to pray.  Would they give their lives or fortunes?
Look at the last part of that phrase, “our sacred Honor.”  That’s a laugh anymore.  Tell me which of the bureaucrats in office understand honor, much less the sacredness of it.  What does a name mean anymore?  Do you carry within your being as you go through the day that principle of “sacred honor”?
We are in a testing time in this country.  Commercials and media drive us crazy; hmmm, where is their sacred honor?  Liars, cutthroats, extortionists, are trying to run the country, when in actuality it was set up to be run by the representatives of the people.  Of course, much of the blame lies with the people themselves.  So much of our election process is built upon perception and emotion, not on an educated electorate, and that was a fear of the Founders.
I recently came back across an article written by GB Oliver in which he writes.  “Governments possess no power, only force.  The power resides in the people and, when they exercise their powers, it creates life and energy; the force of government robs its people of energy.  Power arises from meaning, driven by motive and principal.  Force is incomplete and creates nothing, therefore, it must always move in opposition against something.”  When an oath was taken and men gave their sacred honor to uphold their ideals it once meant something, now we see those who strive for leadership positions and their cronies, the media, trying to manipulate the people.
Know what?  They do a good job of it.  Guess the question for all of us is–where is our sacred honor?

“Righteousness exalts a nation, But sin is a disgrace to any people.”
–Proverbs 14:34 (NASB)

“The deceitful walk a thorny, treacherous [trail]; whoever values life will stay away.”
–Proverbs 22:5 (NLT) 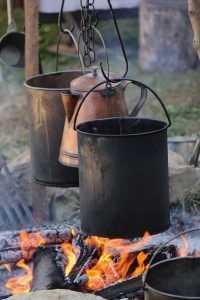 “We made our fire, and we all had coffee and fried salt pork.  Coffee made me feel better.”
–Robert B. Parker

Whooee pard, did I sleep hard last night.  It was hard pullin’ out of the sack this mornin’.  But have the coffee ground, brewed, and ready to pour, so set yourself down.  Sure am gettin’ tired of election commercials.  Gettin’ tired of the media and their gab.  Gettin’ tired of this election commotion – period.  Good thing the Lord is in charge of our lives, for if that woman gets elected and the Senate goes back to Democrat, well bar-the-door.  Plus we’ll see what happens to the 2nd Amendment.
Been ponderin’ some; tryin’ to keep the ol’ gray matter movin’.  Things have really changed the past 10-20 years.  I really see it in the classroom and it’s pourin’ out into the street.  We’ve got some coddled youngsters out there, and what I call some out-an’-out punks.  Gettin’ quite tired of hearin’ them cry about entitlement.  Just like those who won’t stand for the National Anthem cause there are injustices out there.  Yep, there sure are, but much better than other places to live.  All that is happenin’ is makin’ people angry and upset and that sure don’t help.
Right now I’ll take a little entitlement; I think we’re both entitled to ‘nother cup of coffee.  Sometimes it’s hard to quit stewin’ over situations, especially those that we can’t do much about.  It keeps the gizzard riled up and that’s not good.  If the Lord is truly in charge of our lives, He’ll see us through, and help us straighten our aim.  So don’t go out there pickin’ trouble, there’s ‘nough of it that come your way.
When life starts to buck, the Lord will be with you.  He does expect us to do our part, so before you mount that bronc, I sure hope you checked your cinch.

It was a place I could have stayed forever.  How many times I have found such campsites!  Place so beautiful it gave a man the wistfuls to see or to think back on.  So many times we said, ‘We’ve got to come back some time!’ an’ knowin’ all the while we never would.”
–Louis L’Amour  (Lonely on the Mountain)

“A prudent person foresees the dangers ahead and takes precautions; the simpleton goes blindly on and suffers the consequences.”
–Proverbs 22:3 (NLT)