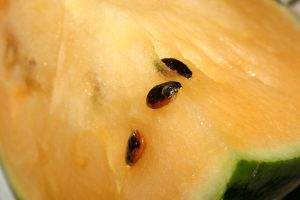 I’m not going to let worry…rule my life.  It seems to me that if a man is going to get anywhere in this life, he’d better start for somewhere, and have something definite in mind.”
–Louis L’Amour  (Chancy)

“For the sin of this one man, Adam, caused death to rule over many. But even greater is God’s wonderful grace and his gift of righteousness, for all who receive it will live in triumph over sin and death through this one man, Jesus Christ.”
–Romans 5:17 (NLT)
——————————-
Several years ago we went down to the Valley to pick oranges and grapefruit.  My, when they came off the tree they were so delicious.  Fruit tastes much better when it ripens on the tree.  Plus the fact that I am a very picky eater when it comes to fruit.  It must be just right, and it seems that certain years my taste buds enjoy some fruit above others (and by fruit I mean melons and berries as well).
Last year it was peaches.  They were so tasty last year; my palate was satisfied.  I went to the store the other day and the peaches looked good so I purchased a couple.  Let me tell you I wasn’t disappointed.  But as I said, I am particular.  Cherries I really like, but if they are soft, forget it; the same goes for plums and grapes.  Good cantaloupe and honeydews can’t be beat, but hard to pick a good one.  One of the main problems is that they are plucked from the vine or tree too early to get them to market, thus destroying some of the flavor.
Now apples, it’s hard to beat a good apple.  I like them hard, firm, and crisp.  Grab a hold of one and it feels just right, but take a bite and it is soft or grainy.  They can sure fool a person.  You probably are not as picky as I am, but the fruit I eat has to be close to just right.
Makes me think of Christians.  Too many times we pluck them off the tree too early and send them out into the world, but they haven’t ripened enough.  They get overwhelmed and often are cast aside.  Or sometime they look ready for the battle they will face, but one bite out of them and it is found that they are grainy, soft, not fit.  Or bite into a luscious looking peach or plum, and though it make look good that bite proved they are sour.
Yet, we are admonished to judge people by their fruit.  Maybe that’s why I get a little skeptical when I see or hear of someone saying or doing something that isn’t quite “ripe.”  Some say some of the right things, but they sure don’t look the part.  Others are soft and overripe while others are picked to early to be of any real flavor.
The parable of the sower is similar; it deals with grain, but the idea is in part the same.  “The seed that fell on the footpath represents those who hear the message about the Kingdom and don’t understand it. Then the evil one comes and snatches away the seed that was planted in their hearts. The seed on the rocky soil represents those who hear the message and immediately receive it with joy. But since they don’t have deep roots, they don’t last long. They fall away as soon as they have problems or are persecuted for believing God’s word. The seed that fell among the thorns represents those who hear God’s word, but all too quickly the message is crowded out by the worries of this life and the lure of wealth, so no fruit is produced.” (Matthew 13:19-22, NLT)
One thing about fruit that does not quite delight the palate–it can be made into jelly or jam.
——————————————-
“Soldiers, Sailors, and Airmen of the Allied Expeditionary Force:
You are about to embark upon the Great Crusade, toward which we have striven these many months.
The eyes of the world are upon you. The hopes and prayers of liberty-loving people everywhere march with you.
In company with our brave Allies and brothers-in-arms on other Fronts you will bring about the destruction of the German war machine, the elimination of Nazi tyranny over oppressed peoples of Europe, and security for ourselves in a free world.
Your task will not be an easy one. Your enemy is well trained, well equipped, and battle-hardened. He will fight savagely.
But this is the year 1944. Much has happened since the Nazi triumphs of 1940-41. The United Nations have inflicted upon the Germans great defeats, in open battle, man-to-man. Our air offensive has seriously reduced their strength in the air and their capacity to wage war on the ground. Our Home Fronts have given us an overwhelming superiority in weapons and munitions of war, and placed at our disposal great reserves of trained fighting men. The tide has turned. The free men of the world are marching together to victory.
I have full confidence in your courage, devotion to duty, and skill in battle. We will accept nothing less than full victory.
Good Luck! And let us all beseech the blessing of Almighty God upon this great and noble undertaking.”
–General Dwight D. Eisenhower (June 6, 1944, D-Day, the invasion of Normandy)

Much time has transpired since that eventful day in 1944.  The world has changed, but what would it be like if the invasion had failed?  What would it be like if Hitler’s Nazi Germany had stopped the Allies on the beach and then gone on to develop nuclear weapons and defeated Britain?  What would it be like if the sadistic warlords of Japan had stopped our forces on the beaches of the Pacific?  Life as we know it would certainly be different.  Those who clamor for more and more freedom, would not even have a clue as to what freedom meant.  There would not be a “snowflakes” or sanctuary cities.
After D-Day the war in Europe was won.  It would be another year before that was fulfilled however.  Many more battles would take place and many more lives would be lost.  D-Day assured the winning of the war, but death and destruction still happened.  Our lives are similar.  When we accept Christ (D-Day) we are assured of winning the war and walking through the glorious gates of heaven.  That does not mean that there will be no more battles to fight.  That does not mean that there will be no more casualties or scars from the campaign of life.
Therefore, we need to beseech the blessing of Almighty God on our lives, our families, and our endeavors.