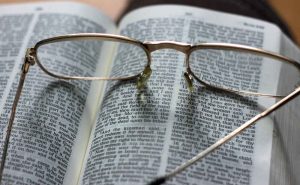 “In the country of the open spaces a man must have sand. Courage is the basis upon which the other virtues are built, the fundamental upon which he is most searchingly judged Let a man tell the truth, stick to his pal, and fight when trouble is forced on him, and he will do to ride the river with, in the phrase of the plains.”      –William MacLeod Raine (The Fighting Edge)

Several years ago I was asked to facilitate a Sunday School class. I really did wonder what he meant by “facilitate.” I told him to give me a week and I would get back to him. The next week I went to him and said I looked all through the Bible but couldn’t find anything to do with facilitating a class. I then said that I would teach a class, but not facilitate.
I have pondered that term many times over the years, and I decided that it is a very dangerous notion. When there is a group of people discussing and there is a “facilitator” then every opinion is valid. What happens to sound doctrine? Doctrine become relative to the whims of the people and that in itself is not biblical.
I came to the conclusion that people who want to be called a “facilitator” rather than a “teacher” actually reject sound doctrine. A facilitator is afraid of the concept, responsibility, and accountability that comes with being a teacher. James tells us that “Not many should become teachers, my brothers, knowing that we will receive a stricter judgment.” (James 3:1, HCSB) Furthermore, there is an office in the church recognized as a teacher (Ephesians), not a “facilitator”.
—————————–
Here is something for you to ponder for the week. The pastor of our church has been preaching on the proper role of fathers/shepherds. Yesterday he used some of the last words of Paul, so I decided to go and contemplate on that chapter.
Last words–they usually are important and mean something. Often they tie up the person’s life and become their legacy. Look at just a few of the last words of Paul from 2 Timothy 3. Verse 1, “But know this: Difficult times will come in the last days.” The word “difficult” is bettered rendered “dangerous” or “perilous”. Look at the world, look at the nation–these are perilous times!
Then he goes on with a list (another list) of wicked people. What is a person to do? Verse 5 gives the answer, “Avoid these people!” When evil becomes worse and assails, heed these words, “Evil people and impostors will become worse, deceiving and being deceived. But as for you, continue in what you have learned and firmly believed.” (3:13-14) And he concludes with the following from chapter 4, “The Lord will rescue me from every evil work and will bring me safely into His heavenly kingdom. To Him be the glory forever and ever! Amen.” (4:18)
Remember, the world is not your friend; it is in fact, your enemy! It seeks to compromise or destroy you! Grasp hold of true doctrine–be a sound person in word and deed.
—————————-
My quotations from the farmer are over, but I might come up with a few that will suffice for common sense. Try these on for size.
“Halfway is the devil’s tradin’ post where most travelers decide to give up.”
“Remember to load your brain before you shoot your mouth off.”
“A life without Jesus is ten pounds of sad in a two pound sack.”