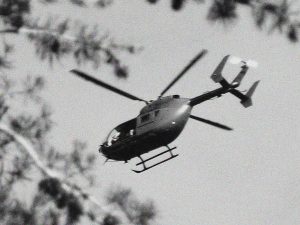 “Casualties many; Percentage of dead not known; Combat efficiency: we are winning!”      –Col. David M. Shoup

There’s only so much a person can carry. This is true in any area of combat, but especially true in the jungle. The front lines can very easily become blurred, similar to urban fighting. The soldier wonders, “Where is the enemy?” He not only faces the real enemy, but also has the the addition burden of the jungle, the burden of carrying equipment.
Ask the veteran of Vietnam. Often soldiers would go out on an operation carrying four or five days’ worth of rations, plus six to eight canteens of water, plus ammunition and other equipment. Moving through the jungle there would be strict radio silence. There would be a predetermined location to wait. After five days in the jungle rations and water would be low, and if they had been in a firefight then ammunition would also be low. That predetermined location was vital to survival, for this is where the choppers would come to resupply. Soldiers really never doubted that the choppers would not come, but there was always relief when they heard the sound of the rotors.
Never doubt that we are in a real battle against the forces of evil in this world. If you do then you are a danger to yourself, your family, and those around you. In one way of speaking you are in a jungle of evil. The world has vines and vile water and there are the forces of the enemy lurking in the darkness and in the depth of the undergrowth. Yet, we are there in the midst of it. We have been called to be there.
Maybe we are low on rations–eat from the manna that Christ provides. Water is low–the presence of the Holy Spirit is that refreshing rain. Running low on ammunition? We are fully supplied with the armor of God. We don’t doubt that we will be resupplied or relieved, but when we hear that sound from above it gives us more hope to fight on.