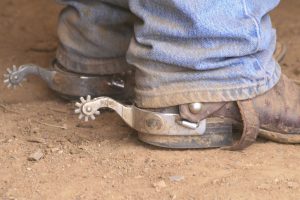 When I said he was “much uglier than me,” the man looked down; that gave me just enough time to thrust the Greener up under his chin. I sorta pushed and he went to his toes.
“I guess we sorta got ourselves a dilemma here. It’s what some call a ‘Mexican standoff’; unless we agree someone is bound to lose. You can pull that trigger, and it’ll get me sure ‘nough, but I’ll still be able to pull mine as well and then the top of yur head’ll come off and you’ll sure not collect on that bounty.”
I gave a little nudge upward. Now I’m sure he was a bit uncomfortable. It was bad enough to have a shotgun pointed at you, but it just had to be worse if it was up under your chin. “Why don’t you unholster that gun of yours and I’ll drop the shotgun. Plus it doesn’t pay to go shooting United States Marshals.”
“Marshal!” he exclaimed. “I thought you were an outlaw. Honest I would never have pulled on you if’n I thought you were a marshal.”
While he was jabbering his apologies and took him over to the hitching rail and tied him to it. I grabbed a kid walking by and gave him a nickel to go and fetch the town marshal.
“Dangerous thing, being a bounty hunter,” I paused. “Especially if you don’t understand who put out the poster. How old are you anyhow?”
“Past twenty!” he said a little indignantly. “Why did you go and tie me up?”
“You broke the law. Hmmm, how many years for the attempted murder of a U.S. Marshal? I guess at least thirty in the penitentiary. Why, you’ll be an old man when you get out.”
His eyes widened. “Honest Marshal, I didn’t know.”
“Those are famous and often-used last words. Plenty of folk will try and use them at the Last Judgment. Good lesson to learn, if you live long enough, ignorance can be dangerous.”
Maybe I shouldn’t have done it, but I was having a little fun with the kid. Maybe too much fun. “What’s your name?”
“Tandy.”
“Just Tandy?”
“It’s Jean Tandy,” he replied.
“I didn’t quite catch that, did you said John?”
“No. Jean, J-e-a-n.”
“That spells Jean, that’s a girl’s name!”
“No, it’s Jean! My mother was French!” he said exasperated.
“Well, what Frenchman would give her kid a girl’s name? What does Jean mean?”
“It means John in English,” he replied.
“My mercy, then why didn’t she just name you John rather than Jean? I can see why you call yourself Tandy.”
The marshal was coming up the street. At first glance he seemed to be a competent person. At last he was ragtag and filthy. “Marshal, you know anything ’bout this fellow? He tried to collect a bounty on me.” I showed him the poster.
“Never seen him before. Lots of folk movin’ in and out of town right now. Want I should take him down and lock him up?”
I looked at the kid. He was truly scared. “Mister Marshal,” he was almost bawling. “I’ll do anything to help ya, just don’t lock me up in no prison.”
“Nah, I think I’ll have a little talk with him. If I don’t like what I hear I’ll bring him on down to the jail.” The marshal nodded and walked off.
“Hungry Tandy?” I asked. “I’ve found it always a little easier to talk over a good meal, coffee, and maybe a good piece of pie. Any place ’round here where we can find some?”
“I haven’t been here long…but Marshal, I don’t have any money to eat in a restaurant.”
“This is a business meetin’, therefore the meal is paid by the business.” I untied him. “Let’s go, I have a few things to discuss with you.”
We walked in and found us a table. The waitress was on the job and quickly brought us some coffee. I ordered the elk stew and biscuits and told Tandy to get what he wanted. He ordered a slab of beefsteak. I guess a growing boy needs food.
“Want a job?” I asked and he looked up. “I’m tired of folk like you comin’ up to me to collect that bounty. Some of them have tried to backshoot me. Now, I can take care of most problems in front of me, but those I can’t see a-comin’ tend to fret me some. I need someone to be around and watch that my back don’t become an easy target.”
I waited for an answer…